Owls are distinctive and much-loved countryside birds. Widely distributed across the UK, these birds have suffered declines through the 20th and 21st century and are thought to have been adversely affected by organochlorine pesticides such as DDT in the 1950s and ’60s. Housing development and changes in farming methods have also added to their decline.

To help with the conservation of these beautiful species Ferndown Town Council Ecological Project have invested in 3 barn owl nesting boxes, 2 Tawny Owl nesting boxes and 2 little owl boxes. These are being located at suitable sites within the Ferndown Area. 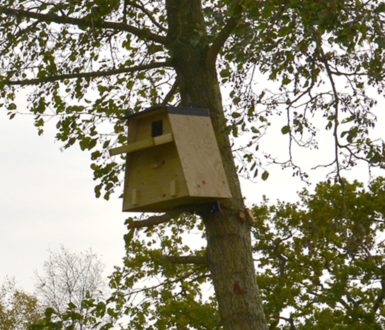 The barn owl is on Schedule 1 of both the Wildlife and Countryside Act 1981 therefore, the birds, their nests, eggs and young are fully protected at all times throughout the UK.

Barn owls usually choose to nest in holes in trees, or undisturbed buildings such as barns and outbuildings. They hunt along field edges, the edges of watercourses. Grass strips alongside woods provide ideal hunting habitat for barn owls.<p.
Recent studies suggest that a pair of owls require about 20-25 km of edge, with several suitable roosting sites, although this varies in different parts of the country. Rodents comprise about 90 per cent of their prey, especially short-tailed voles, followed by wood mice and brown rats.

The tawny owl> is an owl the size of a woodpigeon. It has a rounded body and head, with a ring of dark feathers around its face surrounding the dark eyes. Tawny owls in the UK are mainly reddish brown above and paler underneath. It is a widespread breeding species in England, Wales and Scotland but not found in Ireland. Birds are mainly residents with established pairs probably never leaving their territories. Young birds disperse from breeding grounds in autumn.

This small owl was introduced to the UK in the 19th century. It can be seen in the daylight, usually perching on a tree branch, telegraph pole or rock. It will bob its head up and down when alarmed. In flight it has long, rounded wings, rapid wingbeats and flies with a slight undulation.

The Breeding Bird Survey data suggests that little owl numbers are declining, with the UK population estimated to be down by 24 per cent between 1995 and 2008. The following link to the Barn Owl Survey http://www.barnowlsurvey.org.uk/ is very informative.